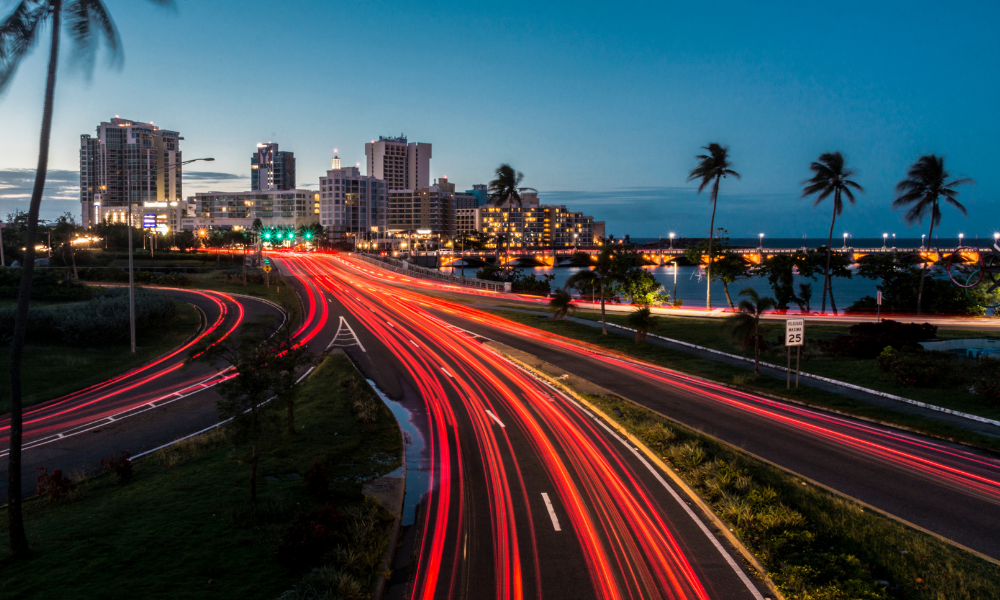 San Juan Better Than Ever
After Hurricane María

It’s been almost three years since Category 5 Hurricane Maria made landfall on Puerto Rico, wreaking havoc on the island and leaving most residents without electricity and clean water. Tourism, which accounts for 6.5 percent of Puerto Rico’s gross domestic product, took a beating, with hotels closed for year-long repairs, airlines cutting service and cruise lines shifting itineraries to other Caribbean destinations. Timing for the hurricane couldn’t have been worse, coming on the heels of the government’s announcement in May 2017 that it was unable to pay more than $70 billion in public debt and thus forced to file for bankruptcy. Large protests and a change of government would follow. Then, in January 2020, a 6.4-magnitude earthquake rocked the south side of the island, forcing San Juan restaurants to close while power was restored. And as we write this story, coronavirus runs rampant across the globe with severe economic implications for all destinations, including Puerto Rico.

Facing this tidal wave of adversity, most people would assume Puerto Rico’s economy is in dire straits. On the contrary, the island staged a remarkable recovery since Hurricane Maria. Not solely reliant on tourism, Puerto Rico was able to rebound much faster than the Virgin Islands, with employment numbers exceeding pre-hurricane levels within a year of the storm thanks to construction and rebuilding. In July 2018 a destination marketing organization called Discover Puerto Rico was launched to ensure the positive aspects of the island were being reported. This led to Lin-Manuel Miranda bringing his hit play Hamilton to San Juan and led to accolades for the island, such as being named the No. 1 Place to Go in 2019 by The New York Times.

Arrivals into San Juan’s Luis Muñoz Marín International Airport set records in 2019, with a 5.3 percent increase in arrivals over the previous high in 2016, for a total of 4.7 million passengers. Upon arrival, business and luxury travelers can now choose from a bevy of reopened upscale properties like Dorado Beach, a Ritz-Carlton Reserve; The St. Regis Bahia Beach Resort; the InterContinental San Juan; and Fairmont El San Juan Hotel.

Recent foreign investment also led to new hotel openings such as Hyatt Regency Grand Reserve Puerto Rico, making its beachfront debut in August 2019. The über-sybaritic Four Seasons brand will also make its debut later this year on the northeast coast of Puerto Rico with 136 rooms on 610 acres of beachfront property.

The big excitement in San Juan is the much-anticipated launch in the coming months of a five-acre entertainment complex next to the Puerto Rico Convention Center. Called El Distrito, or The District, it allows attendees at the convention center to simply stroll across the street to dine at a slew of new restaurants and bars, enjoy live music, go dancing, even try a zip line. The three main anchors of the project are the 177-room Aloft Hotel San Juan; Caribbean Cinemas state- of-the-art movie theaters; and the Coca-Cola Music Hall, a mixed-use performance venue with space for 6,000 people, including two outdoor bars and a stage for performances. The restaurants and lounges will feature culinary options from fast-casual eateries to fine dining.

Following Hurricane Maria, Puerto Rico’s entrepreneurial spirit became evident in a flourishing farm-to-table movement. The country took a turn toward regionalism, with a concerted effort to grow more food on the island and reduce imports. The result is a burgeoning growth of Puerto Rican cuisine. San Juan-based Spoon Food Tours brings guests on walking tours throughout the city to try the dishes locals love. One of the island’s most celebrated chefs, José Enrique, creates criollo-style fare in the Condado neighborhood, a 15-minute drive from Old San Juan. His Latin American brasserie features such entrées as fried yellowtail with sweet yam mash and salt cod bacalaítos, all washed down with a coconut and rum cocktail.

Agritourism options are also rapidly emerging, offering a behind-the-scenes look at how the island’s harvests shaped Puerto Rican culture. This is especially true with local coffee production. Numerous haciendas like Hacienda Lealtad and Hacienda Muñoz offer the chance to see the process of harvesting, roasting and grinding the renowned Puerto Rican coffee in a historic setting.

Hit with both a devastating hurricane and earthquake, it’s no surprise sustainability emerged as a major priority. The Puerto Rico Energy Public Policy Act, passed in March 2019, set a 100 percent renewable energy mandate for 2050. The Green New Deal will elevate the economy and speaks to the island’s continued resilience. Last September, Puerto Rico played host to its first-ever renewable energy fair, showcasing energy source alternatives that will now be implemented at many of the refurbished and new hotel properties.

While creating a reinvigorated San Juan focuses on the latest projects, let’s not forget the city’s vibrant character stems from its history. Old Town, the oldest urban core in the United States, celebrated its 500th anniversary in 2019. Walk the narrow cobblestone streets past the Spanish Colonial architecture into the large plazas, and you can’t help but be smitten by its old- world charm. San Juan might continue to reinvent itself, but its greatest allure will always be its past.

‍After Hurricane Maria, Puerto Rico took a turn toward regionalism, with a concerted effort to grow more food on the island and reduce imports. How has this affected the local cuisine?
We have seen a growing entrepreneurial spirit and a focus on local agriculture, leading to a boom in the farm-to-table movement. Restaurants are consciously featuring locally sourced ingredients, and chefs are encouraging locals and travelers to savor the island’s locally produced ingredients, part of the unique flavors so intrinsic to Puerto Rico’s culture. This can especially be seen in our local coffee production.

‍Puerto Rico tourism bounced back in dramatic fashion in 2019. How did 2020 look before the pandemic?
Would Puerto Rico be a safe travel bet for North Americans during this outbreak? Puerto Rico had a record-breaking year in 2019 and strong momentum leading into 2020. Lodging revenue and supply were at an all-time high, surpassing the island’s past high in 2015. Additionally, passenger arrivals were also the highest ever, receiving 5.2 million passengers across all airports in 2019. And despite seismic activity at the beginning of the year and prior to the pandemic, 2020 was poised to be a record-breaking year, as well. Nonetheless, we learned from past adversities and prepared for a quick rebound as travel restrictions loosen. Puerto Rico exercised an abundance of caution from the onset of COVID-19 and was the first U.S. destination to implement an island-wide curfew and other measures to help stop the spread of the virus and set the stage for a rapid recovery. The island formally reopened for in-bound tourism July 15.

‍Puerto Rico is known for its resiliency, bouncing back after hurricanes and earthquakes. What sustainable measures are hotels undertaking to offset global warming and the rising seas in the future?
Puerto Rico is constantly taking steps toward sustainability. In fact, the island passed The Puerto Rico Energy Public Policy Act in March of last year, which set a 100 percent renewable energy mandate for 2050. This is in addition to the Green Certification Program, which endorses participating tourism facilities that comply with sustainable practice criteria. Recognized by the EPA, the program allows evaluation of each property to obtain certification as Green Lodging. Many properties implemented sustainable practices, from energy and water conservation to waste reduction and more.

‍El Distrito will soon make its debut in San Juan. What most excites you about the future of San Juan and Puerto Rico?
Distrito T-Mobile, a unique experiential complex that combines the best in global retail, destination dining, art, entertainment, music, technology and hospitality, will open in Q4 of 2020. It will apply safety-first concepts including technologically advanced equipment as well as refined health protocols to guarantee the safety of all our visitors and employees. Distrito T-Mobile will be an exciting new addition to the Convention Center District, which already features the Puerto Rico Convention Center (the most technologically advanced in the Caribbean) and hotels including Sheraton Puerto Rico Hotel and Casino, Hyatt Place, Hyatt House, Caribe Hilton and the new Aloft San Juan. We’re also excited for the return of the cruise industry, given our San Juan port is one of the most important hubs for Caribbean cruising and the cruise industry has a significant impact on the local economy.

‍INFO TO GO
Taxis are an efficient and affordable way to get around town when not walking. The approximately15-minute drive from Luis Muñoz Marín International Airport to Condado costs $15, while the 20-minute drive (without traffic) to Old San Juan costs about $19. Luxury vehicle pickups — limosinas (usually a Lincoln Town Car limousine) — are also available. Cost from the airport to hotels ranges $100–125.

‍DIVERSIONS
Start on the cobblestone streets of Old San Juan, founded in 1519 by Ponce de Leon. You can still see glimpses of the blue stone, adoquine, brought over as ballast in Spanish ships. Then wander over to the Historic District, undoubtedly the best-preserved neighborhood in the Caribbean. More than 400 Spanish Colonial buildings dating from the 17th century have been restored around the outdoor cafés and restaurants. Head down to the glorious green expanse that leads to the historic fort of El Morro, overlooking the pounding waves of the Atlantic. Nearby, view the murals of the colorful neighborhood of La Perla, where they filmed the music video for Luis Fonsi’s hit song, “Despacito.” Once you have seen your fair share of the city, it’s time to drive the interior or hit the water. Take a daytrip into the mountains to visit San Germán, a smaller version of San Juan without the crowds. Founded in 1512, the town is the second-oldest on the island, and its historic zone houses a wonderful collection of buildings, spacious plazas and monuments. Then head out on one of the island’s ecotours: sea kayaking around Bioluminescent Bay after sunset, hiking underground in the massive caves of Rio Camuy Cave Park or trekking in the lush El Yunque National Forest. Bioluminescent Bay emits a neon-blue color from the microorganisms found in the water. At El Yunque, colorful orchids line the rain forest trails, leading to a refreshing dip under a waterfall. You can arrange all three adventures as day tours from San Juan.

‍O:live Boutique Hotel
This Mediterranean-inspired Small Luxury Hotel of the World in the Condado neighborhood features rooms adorned with spacious terraces, Spanish tiles and outdoor showers. At sunset, head to the rooftop for a glorious view.
55 Aguadilla St.
$$$$

‍José Enrique
The celebrity chef just added ceviche and carpaccio to his menu, along with sparkling wines and sake. Whatever you order, savor freshly caught fish grilled with Puerto Rican flair. Reservations are a must.
1021 Ashford Ave.
$$$$